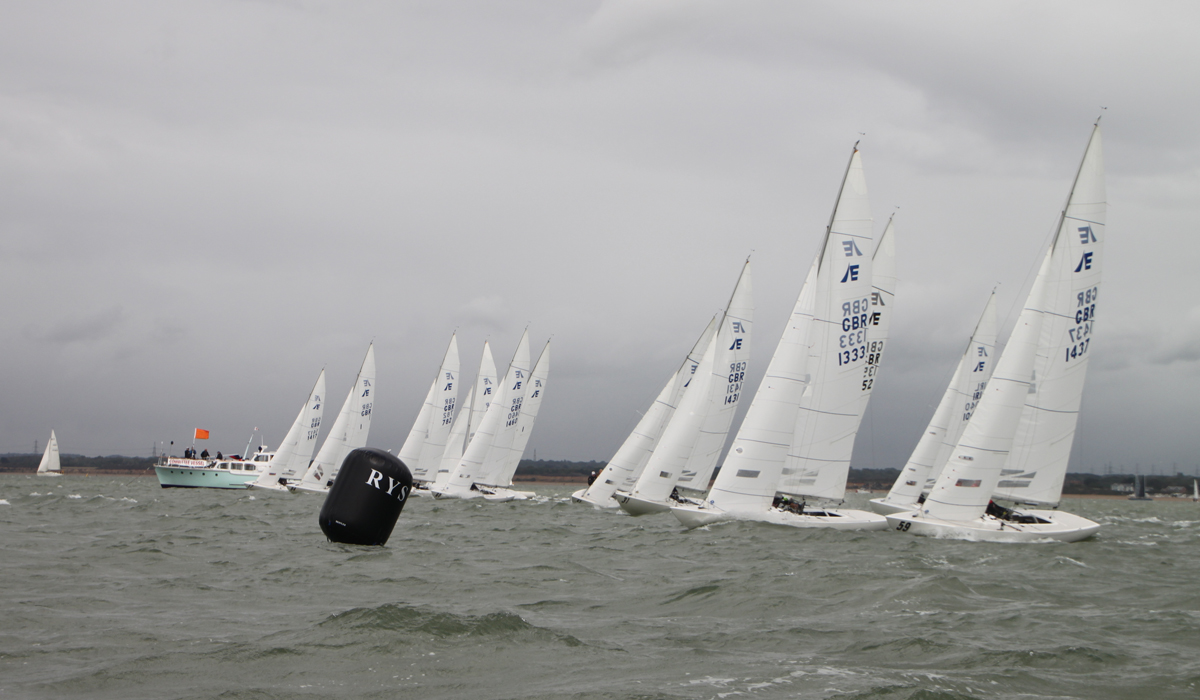 The UK Etchells fleet gathered for the scheduled three-day Sir Kenneth Preston trophy at the Royal Yacht Squadron over the May bank holiday weekend but in the end, because of light winds on day two and day three, racing activities were squeezed into the Saturday afternoon. It may not have been a lot of boat racing and even the Saturday required patience from the PRO whilst a sea breeze built, but it was fabulous racing, nonetheless. 22 boats hit the start line, James Howell missing the first day as he was busy winning the 5.5 metre regatta on Lake Garda, and at the first windward mark most of the 22 boats were nose to tail. Sailed in a beautiful 9 to 12 knot south-westerly, on a glorious sunny afternoon this was a continuation of last year’s ultra competitive racing, as the fleet builds towards the world championship to be held at the Royal Yacht Squadron in September.

Continuing where he left off in the Spring Cup two weeks ago (five bullets to win a six-race series) Lawrie Smith and his crew (Richard Parslow / Gonçalo Almeida Ribeiro / João Matos Rosa) put their new David Heritage built boat in the water on Friday and immediately set about winning race one. Winning Etchells races is about doing lots of small things a tiny bit better than the competition and Smith continues to show his mastery of the sport. Long-time Etchells Sailor Shaun Frohlich took second after a good winter training season in Miami, while James Markby (David Bedford and Ben Paton) new to the class and in an old boat that they had not had much time to tune up, scored an excellent third after leading the race early on.

The breeze dropped a little for race 2 but it was still solid hiking conditions. Lawrie Smith marched out to another bullet, this one with a comfortable lead, ahead of Paul Brotherton (James Fawcett / Arran Homan / Ellen Morley) who got second. Paul is new to the Etchells this year but already making his mark at the front of the fleet after a long career sailing at Olympic level and coaching others to the same standard. Showing the wide variety of teams in the class however, third place was taken by Rhys Lewis (Joe Bradley / Mike O’Donovan / Olly Dowson-McGill) one of the youth teams who secured a boat in the Royal London Yacht Clubs Etchells Academy program, which ran through January and February this year. This was a really mature performance by the young crew who were always circulating in the top five and showed no nerves under pressure, locking in a podium place.

Despite race three not starting until 1730 the breeze actually strengthened again before the start. The tide having turned there were a lot of boats at the committee boat end looking to get right and head up the mainland shore out of the building flood tide, but in actual fact there was more wind to the left and a left-hand shift on the first beat so all of the leaders came from that side. Lawrie Smith took the gun again With James Markby in second and Paul Brotherton in third. Markby had an unlucky 18th in race two when their forestay broke and they showed great seamanship to get the boat back into racing condition in time for race three. By the time they got back to the dock at the end of the day the Spinnaker halyard was was holding the mast up, which gives a sense of the challenge they faced.

With three bullets Lawrie Smith took the overnight lead, and what would in the end become the regatta win, after both Sunday and Monday were drifted off. Brotherton took second overall whilst fleet captain and stalwart class supporter David Franks (Tom Callan / Karl Schafer / Graham Sunderland) was third, counting a fourth fifth and sixth in the three races. Looking down the results that level of consistency is what was missing for most competitors, many having a top 10 result but not being able to repeat that trick often enough. Perhaps special mention however to Jason Losty and his crew (Ewan O Keeffe / Darragh O’Sullivan). New to the class they got 11th in every race showing ultimate consistency and they will surely challenge for the top-10 going forward.

Despite the truncated program the Etchells had a wonderful Sir Kenneth Preston Trophy regatta with dinner at the Royal Yacht Squadron on the Sunday night, and the fleet are back out for the Bedrock Trophy 14th/15th May being run by the Royal Southern Yacht Club.

The Sir Kenneth Preston Trophy provides an opportunity for the Etchells fleet of one design day boats to gather off Cowes for a weekend of fiercely contested racing.

The trophy was first competed for in 1995, after Sir Kenneth Preston, who had led the British sailing team in the 1960 Olympics, presented it to the Royal Yacht Squadron shortly prior to his death. Ever since then, his memory has been commemorated with a series of races.

This edition of the SKP is a World Qualifier Event for the 2022 World Championships hosted by The Royal Yacht Squadron.

The Official Notice Board including Notice of Race and Entry can be found by clicking here at www.yachtscoring.com