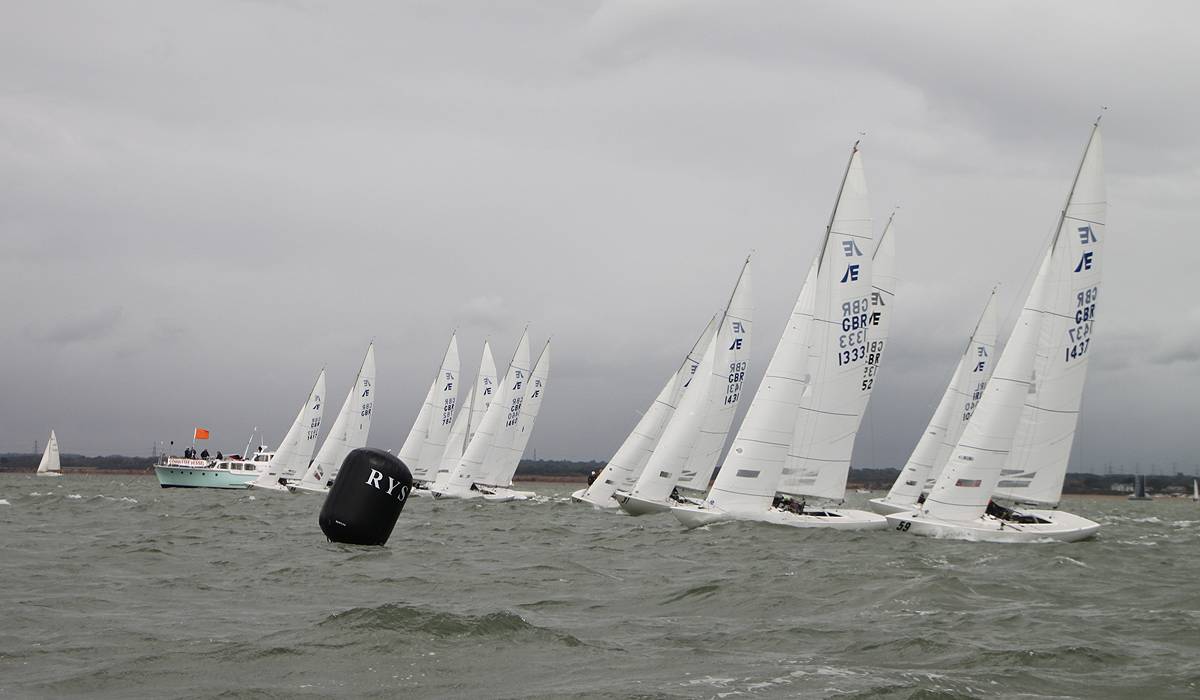 12 socially distanced crews entered the event which was run in the central Solent. Unfortunately Saturday’s storm meant that racing was held only on Sunday and the RYS organised an early start and 4 windward leeward races of just under an hour each. To ensure the races were completed before the time cut off, the “U” flag was used.

Initially a strong flood tide with a westerly breeze ranging from 10-20 kts was the day’s racing conditions. However, the varying cloud cover meant that big shifts and pressure variations were available for all crews to try and find. Unfortunately, as frequently happens, getting from one favourable shift to another meant sailing through light patches, so the pack was frequently shuffled.

Main Interest of the day was on “Man’s Best Friend” and “Swedish Blue” both of which had been practicing with the new Andrew Palfrey designed jib track system, and it was evident from the fleet support rib that the optional smaller wind angle gave a tremendous advantage in getting a clean lane, starting and laying marks, but if overcooked or not matched by the main sail, could easily jeopardise boat speed.

The first race was won by Robby Boyd sailing “Sumo GBR 1020” who choose correctly the right hand side of the course, as the wind shifted right, and with the added pressure on that side he led and won the race convincingly.

Race 2 was sailed in one of the more sustained wind pressures, and Ante Razmilovic, the fleet’s high wind specialist sailing “Swedish Blue” looked to have won the race by the top mark. However, a wayward halyard meant that sailing minus spinnaker or a jib at the top and the bottom of the course was slow, and this disadvantage meant that Swedish Blue slipped back into the fleet, while John Warwick’s “Audrey” helmed by Will Bedford capitalised to win.

Race 3was where the event was lost, Grant Simmer sailing “Man’s Best Friend” tried a tight cross on Robby Boyd’s “Sumo” and with Robby feeling he was infringed protested, and as Man’s Best Friend continued sailing scoring a podium result they took the overall lead while awaiting the post racing hearing, as Swedish Blue, now with 2 working halyards went on to win the race.

Race 4, and it was all to play for anyone of 7 out of the 12 boats could now win the series, and it was Grant Simmer Sailing “Man’s Best Friend” who took the race, but the series was all down to the protest room, where the port and starboard rule interpretation “reasonable apprehension of a collision” meant that Man’s Best Friend was scored DSQ’d for race 3.

Robby Boyd and his crew of Quentin Bes-Green and Hugh Ward were the 2020 overall winners, and Cat 1 Corinthian winners, and now Robby has name on a prestigious Trophy’s winners’ board in the Royal Yacht Squadron.

Results can be found here.